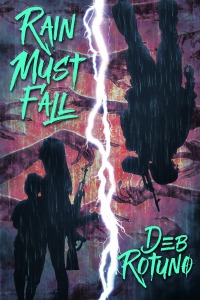 Jack Chambers was all the way across the country—separated from his family—when life as he knew it came to a screeching halt. A virus straight out of a horror movie has been unleashed, turning friends, neighbors, and family members into a walking nightmare. Jack must fight to make his way back home to his wife and son from Florida all the way to Oregon in a world that is determined to kill them all.

Sara Chambers considered herself to be a strong-minded military wife and mother. When her husband is called away for temporary duty, she never thought that her quiet, small-town life would be turned upside down. Following her husband’s frantic instructions, Sara must protect their son, Freddie, and the last remaining members of the small town of Sandy, Oregon, and get them somewhere safe, get them to the one place Jack told her to take them—their cabin at Clear Lake.

The world is no longer safe. It’s kill or be killed. With the odds stacked against them, Jack and Sara fight to not only survive but to hold on to hope that their family can be reunited even against such incredible odds.

Rain Must Fall is available @ Amazon.

"Rain Must Fall is an action driven story, but make no mistake, underneath the chaos and zombies (yes zombies) there is a love story. Not your usual love story…not your usual author. An amazing read—I look forward to part two!"

"If you like stories of survival and beating the odds, you'll love this suspenseful, action-packed story! Deb does a terrific job at world-building, sucking you in from the beginning; and by the end, you'll be craving Book 2!" 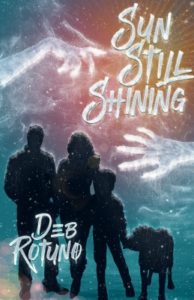 As the Chambers family adjusts to being reunited with each other and their fellow camp members, winter starts to barrel down on the cabins at Clear Lake. The worry of impending snow and unknown violent survivors rests heavily on Jack’s shoulders. He’s determined to keep his family and friends safe, but time is ticking and space is running out at the cabins.

Hope is a fragile thing in the new world, but that’s all Jack and Sara have to cling to as they face an uncertain future for themselves and their family. For no longer is the threat against them merely those infected by the virus unleashed by Hurricane Beatrice. While some stay at Clear Lake to protect the only home they have, others must scout out a new place to live that will accommodate them all. Someplace safe, someplace warm. But splitting up may prove dangerous.

Lives are on the line and loyalties are tested as the members of Clear Lake realize that the virus isn’t the only threat out there. They must fight together to not only survive but also to thrive in their new reality, and for some, their new life may end before it truly begins.